RMIT took over the Capitol Cinema but without the money to refurbish it. Finally, we are seeing some action, and an appeal for funds. 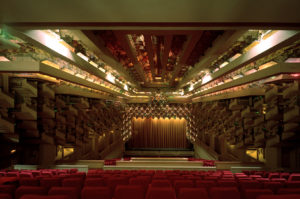 RMIT reached out to the public with its plans to restore the Capitol at a formal announcement this week. Even with the entire ground floor turned into a concrete tunnel with drab cafes, the building is still a stunning piece of architectural history. The roof is a huge array of controllable coloured lights and symmetrical baffles – not bad for the mid-Twenties.

Owned by RMIT University, the theatre has been closed for several years. But it lives on in the memories of countless thousands of film buffs and cinema devotees who recall the time when they first visited the cinema.

For Academy Award winner Adam Elliot, who spoke at the launch event on Tuesday evening, it was a time when his father took him into the city from Glen Waverley to visit the cinema for the first time. For Deputy Chair of Village Roadshow’s John Kirby it was a screening of the 1972 classic The Adventures of Bazza McKenzie (directed by Bruce Beresford).

RMIT Design graduate and games designer Ngoc Vu is too young to have seen a film in the theatre but her dream would be to see a VR production screened at the revitalised Capitol. For Vu, the cinema’s beautiful interior would make an ideal spot to screen the cutting-edge productions of tomorrow so that future generations can have a life-changing moment just like so many past generations of Melburnians.

Opened in 1924 after a three-year build, the Capitol was designed by Walter Burley Griffin and Marion Mahony Griffin, who are also known as the architects of Canberra, Australia’s capital. Architect Robin Boyd famously stated that the Capitol is “the best cinema that has ever been built or is ever likely to be built”.

The commission was unusually lavish for the time and no expense was spared in fitting out the extravagant interior including 4,000 coloured lights that adorn the decorative ceiling. The lights were programmed to change with scenes from the films being screened to add to the atmosphere. Today, only about a quarter of those lamps contain globes, yet it still looks stunning. The Capitol, which is situated within Capitol House in Swanston Street has been described as “the most important twentieth century building in Melbourne” by historian Allom Lovell.

Introducing the event, Pro Vice Chancellor Paul Gough explained his vision for the space as one that will provide a meeting place for all kinds of creative types mingling in foyers and swap ideas and plans as they wait for a screening. It will be an ideal venue for RMIT students to rub shoulders with the screen industry to the benefit of both. RMIT’s Vice Chancellor Martin Bean suggested that its truly majestic space is an ideal place for creative minds to come together to teach, learn and create. “Old media meets new media, which is fitting for our students with our motto of ‘a skilled hand and a cultivated mind,’ he said.

RMIT have engaged architects to draw up meticulous plans for the restoration of the building, bringing it up to the 21st century in its technological abilities while keeping its integrity. It will be capable of screening VR, AR, film and animation with state of the art projection equipment, and also be able to provide learning spaces to more than 1,000 students per week to study film and digital media.

The Capitol was once the main cinema to showcase the great films that came to Melbourne, and it has also staged many theatrical productions and even comedy. At one point it was the base for a Chinese film festival. The Dressmaker’s producer Sue Maslin explained that her first documentary received an enthusiastic screening at the Melbourne International Film Festival when it used the venue as one of its screens.

The State Minister for Training and Skills, Gayle Tierney MP, announced a contribution of $2.5 million towards the refurbishment. RMIT will put in $5 million as well as matching any other donations above $250 dollar for dollar. The goal is to seek a further $2 million from donations from the public in order to complete the project.

One former student (and filmmaker), Ling Ang, has already donated $500,000 towards the revamp. Any person giving more than $250 will have their name posted on a placard in the foyer.

The revitalisation reflects a global trend of re-owning iconic cinemas around the world. It is ideally located as a screen hub right across the road from the Melbourne Town Hall and just up from RMIT University’s city campus. The Capitol will add the missing tooth to the smile in Melbourne’s face that stretches from ACMI to the Ian Potter Museum of Art along Swanston Street.

Donations can be made at: